Custom Sharepoint jobs are not shown in the Sharepoint Central Administration

Sharepoint jobs allows you to execute tasks by scheduler, similar to the way how standard Windows scheduler works. You may consider to move time consuming tasks to the job, so they will run asynchronously and won’t affect user experience (e.g. won’t cause Timeout exceptions because of long task processing during synchronous requests). Sharepoint jobs are executed in separate Windows process called owstimer, so they are isolated from the w3wp process which serves your Sharepoint site and in theory won’t affect performance (I wrote in theory because it is always possible to write code which will slow down your site even from separate process. E.g. if it causes a lot of requests to the content database, which is also used from w3wp).

Here is the example of how you can install Sharepoint job which will run nightly between 1 AM and 2 AM via feature receiver:

Class CustomJob in the example above (see line 55) is defined in the custom assembly, probably the same which contains the code of the feature receiver shown above.

After activation of this feature if everything went well you will see your job in the Central administration > Monitoring > Job definitions. However sometimes you may encounter with the problem that your custom Sharepoint jobs are not shown on production, however on your local development environment everything works properly and jobs are displayed there. Why it may occur and how to fix it?

In order to describe the reason I need to provide more background information about Sharepoint jobs mechanism. Very often in Sharepoint development you have several environments:

As we can see there is often difference between development and QA/production. On the dev we use single server Sharepoint installation, while on QA/production – real Sharepoint farm with several servers. You may specify on what server you want to execute the jobs in Central Administration > Manage content databases > select specific content database:

Dropdown list “Preferred Server for Timer Jobs” contains servers which have WFE role. On the farm environment it can be so that server which has Central Administration, doesn’t have WFE role. E.g. application server may not have WFE role, while CA is still can be used from it. The problem with this configuration is that custom wsp solutions, which you deploy using standard Install-SPSolution cmdlet (or old deploysolution stsadm operation), will be deployed only to those servers which have WFE role. So if your app server is not WFE, custom assemblies won’t be installed to its GAC. This is exact reason of the problem described above. In this case when you open Central Administration > Monitoring > Review job definitions, it sees your custom jobs, but it can’t find the type where job’s code is defined and can’t deserialize it for executing. That’s why it can’t display custom job.

You can fix this problem by manual adding custom assemblies to the app server’s GAC and performing iisreset. But note that in this case they won’t be updated next time you will upgrade your solutions because of the same reason: solutions are not upgraded automatically on the server without WFE role. You will need again manually update them in the GAC. More correct way to fix this issue is to add WFE role to your app server (and not configure app server without WFE role for the new installations). You can do it by Sharepoint Configuration Wizard as described here: Add a Web or application server to the farm. After that solutions will be deployed to the app server and custom jobs will appear in the Central Administration.

Hope this information will be helpful for you.

The described way worked, but it took some time to move all files from old project and verify that we didn’t miss anything.

Rainer Dümmler showed me the easier way to do that and with his approval I post it in my blog. In order to change target platform to Sharepoint 2013 you need to do the following. Edit your .csproj file in the notepad and replace value for TargetFrameworkVersion tag from v3.5 to v4.5. Then add TargetOfficeVersion tag right after it:

So it should look like this after the changes:

Then go to Package subfolder in your project folder and edit Package.package file: add attribute sharePointProductVersion="15.0" after existing resetWebServer attribute.

After that just reload your .csproj in Visual Studio 2012 (it will automatic upgrade of .csproj), change references to the 15 API, recompile it and package wsp.

Thanks for Rainer Dümmler who shared this trick with me. All credits go to him. Unfortunately he doesn’t have a blog yet, but I hope that it will be fixed in future :).

Incoming e-mail settings option in Central Administration allows you to configure Sharepoint to receive incoming emails and place them into document libraries. Configuration of the incoming emails is not simple and straightforward process and in most cases you will need to face with your environment’s specific problems. In general you need to do the following steps:

I won’t provide detailed description of each step because it is described in many articles already. E.g. here you can find detailed instructions: How to configure Incoming Email Enabled Libraries in MOSS2007 RTM using Exchange 2007 in an Active Directory Domain.

When you perform step 3, i.e. configure incoming emails in Central Administration, you may face with the following problem: “Incoming e-mail settings” link is missing in the Operations > Topology and Services:

In order to fix it, close all browser windows and run browser as administrator:

Then type Central Administration URL manually in the address bar. After that you should see missing “Incoming e-mail settings” on the Operations tab:

It also should contain “Services on server” link, which was also missing when you ran CA as non-administrator. In most cases when you launch CA Windows should automatically ask you to run it as administrator. However in some cases it doesn’t happen and you may encounter with this problem.

Several reasons of why TaxonomySession.DefaultKeywordsTermStore and DefaultSiteCollectionTermStore can be null

When you work with Sharepoint managed metadata via object model you often need to write the code similar to the following:

Sometimes TaxonomySession.DefaultKeywordsTermStore property may return null, i.e. termstore variable on line 4 in the example above will be null. In this case you can’t do any operations with managed metadata programmatically. What are the reasons of this behavior and how to fix it? 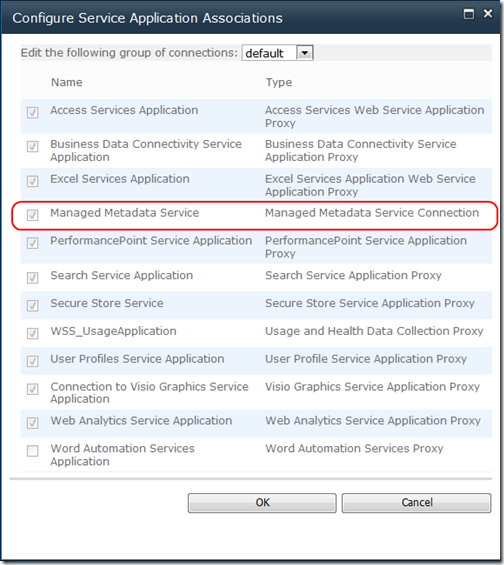 This connection may be part of default connections set as shown on the picture above or included into the custom set. It is important that it will have only one connection, on one of the projects we encountered with situation when TaxonomySession.DefaultKeywordsTermStore returned null when there were several managed metadata connections defined for single web application. 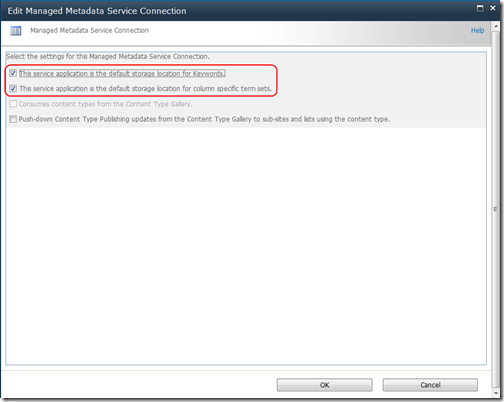 There is also another option “This service application is the default storage location for column specific term sets”, but it affects another property: TaxonomySession.DefaultSiteCollectionTermStore. 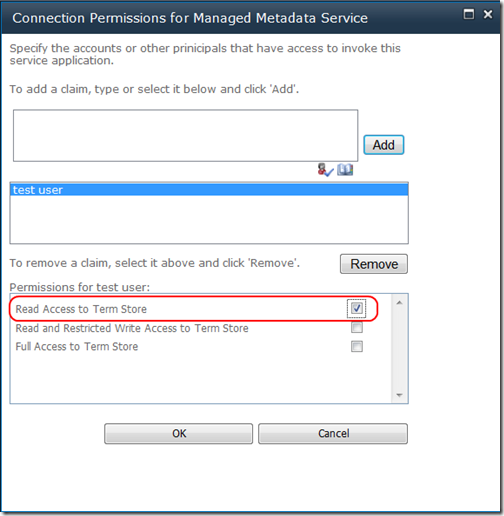 Ensure that account under which you run the code has at least “Read access to term store” right.

This part went quite well. The major problem which we faced with was broken layout in pages edit mode (need to mention also that we migrated publishing sites). But it is caused by the fact that in 2013 you need also to update master pages in order to have all new scripts and necessary controls. E.g. you may use OTB seattle.master or oslo.master as base masterpages for updating your customizations.

The next part of work was migrating of customizations from 2010 to 2013. For 2010 we used standard Sharepoint project templates for Visual Studio 2010. But anyway it is not possible just change target platform from 2010 to 2013 as it is possible for .Net version. In Visual Studio 2012 you need to create empty Sharepoint projects and copy/paste all items one by one (Update 2013-02-17: there is a trick which allows to migrate Sharepoint project from 2010 to 2013. I wrote about it here: Convert Visual Studio Sharepoint 2010 project to Sharepoint 2013 project). In order to ensure that we didn’t forget anything after copying of files we compared content of wsps by comparison tool (we used Beyond Compare, which may compare folders, but you may use your favorite tool for this). The only difference was in feature guids and in SharePointProductVersion in manifest.xml which was set to 15 after upgrade:

After this we retracted wsps for 2010 mode from 14 folder and deployed new wsps for 2013 mode into 15 folder. And then run upgrade of site collections to 2013 mode by PowerShell.

Upgrade went well, we only had several warnings without errors in the logs. But when we opened sites in the browser we got File not found error. After checking Sharepoint logs and using of FileMon tool we found the reason of this error: for uncustomized files (page layouts and master pages) Sharepoint still tried to search their content in 14/Template/Features folder, while correct path is 15/Template/Features, because after upgrade and deploy of customizations there were no files deployed in 14 folder. So Sharepoint couldn’t find content on file system and gave this File not found error.

We analyzed content database and found that AllDocs table (which contains rows for all documents and files in the Sharepoint web application) still has SetupPathVersion = 4. While the correct value for Sharepoint 2013 is 15. We tried to update page layouts’ and master pages’ vti-setuppathversion property but without luck. After updating it and calling SPFile.Update() it was reset to initial value 4. At the moment I know only one solution: update AllDocs.SetupPathVersion in content database directly:

But as you probably know direct modifications in content database are not allowed and leaves system in unsupported state according to MS. So it is more like hack. Anyway after it File not found error was solved and we were able to move forward and resolve another problems (they are minor, like change of all paths for scripts, images, css and for ascx files for visual web parts from /_layouts/MyFolder to /_layouts/15/MyFolder. There is no need to change it for aspx files, because Sharepoint will automatically redirect your application layouts pages to /_layouts/15/).

At the moment we are still looking for the correct way of solving this problem. It may be so that it is caused by the bug in upgrade process, because I saw that other people faced with this problem in Sharepoint MVP distribution list. We ordered support ticket from MS to check this problem, I will update if will know new details. If you also encountered with described issue, please share it in comments.

Update 2013-07-07. Several fixes for this problem are described in the following post: Fix File not found error after upgrade from Sharepoint 2010 to 2013.