Continue series of posts about Azure web jobs with this post how to fetch log of triggered Azure web job programmatically via REST API. Previous articles from the series can be found here:

In order to get log of triggered Azure web job programmatically we need to use the following endpoint:

It returns array of runs - information about last run is stored in first element of array. One of the properties there is output_url which contains url of the log of this run. Having this information we may write the following PowerShell function which will fetch log of Azure web job run:

With this method we may fetch log of Azure web job programmatically.

For triggering web job via REST API we need to send HTTP POST request to the following endpoint:

PowerShell method which triggers web job looks like that:

Here we first get access token via Get-AzAccessToken cmdlet and sent POST request with received bearer token. As result it will trigger specified web job to run now.

In order to get current status of timer triggered Azure web job we may use the following web jobs REST API endpoint:

It will return object with "runs" property which is array containing information about recent runs:

First element of this array corresponds to the most recent run. If web job is currently running status property will be set to Running. Here is function which we can use for fetching web job status in PowerShell:

It makes HTTP GET request to mentioned endpoint and gets list of runs for specified web job.

In order to change url of Sharepoint Online list or document library you may use the following PnP.PowerShell script:

In this example we change list url to MyListNewUrl.

One solution for solving VM starting error in VMware Player

If you use VMware Workstation Player you may face with the following error when try to resume/start VM: 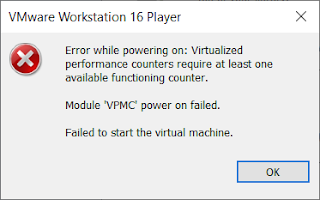 If you faced with this error try to do the following: go to VM settings > Processors and uncheck "Virtualize CPU performance counters" checkbox: 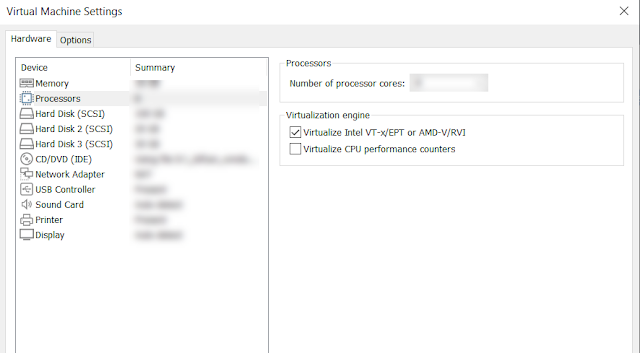 After that try to run VM again. It should start this time.

In my previous article I showed how to query items from CosmosDB using conditions against nested properties: see Query nested data in CosmosDB. In this post I will show how to query items based on presence or absence of complex object property. Let's use the same example which was used in mentioned post:

The first attempt would be to compare it with null:

And it works. However if we will try to use the same technique for fetching all items which don't have metadata the following query won't return any results:

Better option which works in both cases will be to use helper function IS_DEFINED. With this function in order to fetch all items which have metadata property we may use the following query:

And similarly we may fetch objects which don't have metadata:

This technique is more universal since it works in both scenarios.

Let's say we have objects in CosmosDB with complex nested structure:

If values for some field contain multiple values we may construct even more complex conditions by combining conditions for single field values by AND or OR operators depending on requirements.

View my complete profile
I've created this blog for sharing my technical experience in software engineering. Most of posts will be dedicated to Sharepoint. But I will write also about another areas of software development for .Net platform. Hope it will be useful and will help you in your work.